You are not connected. Please login or register

Dennis already knows this, but for everyone else, My wife and i like to write fan fiction. Currently we're writing a story based off of Final Fantasy X-2, crossed with my experiences in the National Guard. I can post a link to that sotry if anyone is interested. Long story short, I love writing. It's been a hobby of mine for a while. At one point in time i had 3 different stories going. One was a Final Fantasy X/Initial D crossover, the second was a Final Fantasy X-2 high school story, and the third was our current pride and joy, A World Away. We have since scrapped the high school fic and the Initial D one, Lack of inspiration on the high school one, and the Initial D one just kind of stalled. I kind of miss the Initial D/FFX pairing, and My wife and i may re-do that one, but nothing definitive yet.

We do, however have plans to start a Final Fantasy X-2/Need for Speed Most Wanted story. We are working on a cast, using the characters from FFX-2, set in one of the cities in Final Fantasy, but using the cars we all know and love. There will be action, romance, and lots of racing. There wasn't much of a story with NFS:MW, but it gives us enough of a base to build a story from there. Guy named Tidus rolls into Rockport (will be using a different city from Final Fantasy) meets a girl (Mia played by Yuna) Runs into Razor and Sergeant Cross, and if you've played NFS:MW you know what happens. He challenges Razor, his superb car acts up, he loses the race, loses car, loses girl (not Mia/Yuna), gets arrested, gets set free, Mia picks him up and takes him to a safe house, helps him get on his feet, he races to gain position on the Black List, and this is one part where we put our own spin on it, he develops a relation ship with Yuna, they end up sleeping together (several times throughout the story), he scores a Skyline (You didn't think I'd forget about my all time favorite car did you? lol) and he beats razor, getting his BMW back as the cops close in. He gets chased as Yuna lies to sergeant cross about Tidus, Cross pursues, Tidus evades, rallies his crew, gets his cars and new girl, and then heads for a different city.

Personally, i can't wait to get the green light form my wife to start it. Let me know what you guys think about it.
Dminted

sounds like it definitely has the potential of being an interesting plot. Have not played any FF in a very long time but bringing that into the world of street racing could be very exciting.
EclipsedSilver

Yeah, I'm going to toot my own horn here, but if it's anything like A World Away, it'll be good. Now, in all honesty, i hate bragging, but I think it'll be a good read. Writing is just my hobby. My real passion comes from working on cars.
Dminted

We all have a great hobby for cars, that is why we are all here on this site lol. Gonna try and take some time to sit and read what you've got when I can.
EclipsedSilver

Sure thing bro. We're going to sit down and start writing it in the very near future.
EclipsedSilver

And here's a link to the aforementioned A World Away. http://www.fanfiction.net/s/4378138/1/A-World-Away-A-Final-Fantasy-X2-Military-Fanfic
EclipsedSilver

Haven't forgotten about either story, just been busy. Hoping to get to write some on the fics in a couple weeks.
Dminted

gotta wait for some down time? Good luck with free time once the baby is here lol
Dminted

Kat just got her book accepted by a publisher and will have it out in bookstores this fall, so exciting. Just keep doing your thing and your ideas will be out there soon enough.
EclipsedSilver

Yeah, until i saw it on Facebook i didn't know she was a writer. Who's her publisher? My mother in law is writing a series of books.
Dminted

Bayou Brew Publishing, they are new but are working on getting it out quickly.
EclipsedSilver

I'll tell my wife. Lord knows my in-laws could benefit from her mom selling her book.
jlopez95 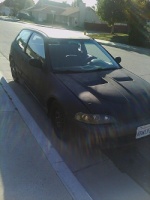 My wife and I just finished chapter 15 of A World Away and should be posting it up in the near future.
Dminted

Sounds good bro, I swear I am the worst person to ask to read anything lol. I am home all day but feel like I have no free time and have been trying to read through your story but it makes it difficult to really get into something with ALL these kids running around here. Good luck on getting it out there. My fiance just got her cover art done for her book and is looking at it being released next month through Amazon and Barnes & Noble.
EclipsedSilver

Yeah I saw ot on Facebook. Looks pretty good. I guess if we wanted to publish it we could after we change a few things. Just never saw myself getting into writing as anything more than a hobby. Lol
Dminted

That's pretty much how Kat saw it too, as just a hobby, but I convinced her that she had a good idea and needed to share it.
EclipsedSilver

The only problem I foresee is that I really like the names from Final Fantasy X, and would be hard pressed to change them. Though Yuna is a Japanese name, I may face copyright issues. I'll keep it on the back burner, because sarah and I have planned out a trilogy.
Sponsored content